“Vulgarity is like a fine wine: it should only be uncorked on a special occasion, and then only shared with the right group of people.”

This week I took a day and tried to be positive, avoid complaining and not fucking swear.

Now most people probably think I’m a pretty positive, polite person and for the most part that’s true but there is another side to me and if you hang around me long enough you’ll see it. I can get into some negative funks and no place quite so easily as at work. 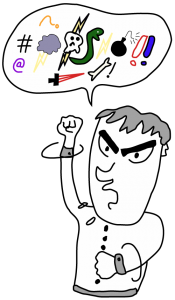 When I mentioned to Emrys that I wanted to avoid saying negative things for a whole day he suggested that I could take it a step further and avoid negative thoughts also. I liked the idea, although I’m very aware that negative thoughts cannot be eliminated and trying to do so is counterproductive. However, one can observe negative thoughts, accept them and not get sucked into them. So that’s what I planned to do.

I made it to 10:23 am before I dropped my first F bomb. Seriously. And that wasn’t easy.

I don’t think I had any real idea just how often I swear (under my breath) at work. It’s a habit I’ve gotten into over the years and no doubt my foul mouthed work partner Shannon is partly to blame. At least she is relatively creative with her swearing, mixing in a few “holy mother of pearls” for good measure. Let me just say also, there really are a lot of idiots in this world and some days you seem to end up dealing with every last  #[email protected]&%*! one of them – you know?!

I don’t think swearing is wrong exactly. It’s a way to vent and if used it selectively it arguably has some value; however my incessant muttered F-bombs are just boring and utterly uninspired.

As the day progressed and feelings of frustration and anger arose, I took a deep breath instead of swearing, snorting like a horse occasionally on the exhale (a remarkably satisfying sound to make and only slightly alarming to coworkers). Frustrated feelings dissipated with each exhale and I didn’t get too invested in any negative thoughts that arose but just observed them and let them pass.

At the end of the day, I have to say I felt pretty great. In retrospect, I think I feed a lot of the negativity I experience throughout the day with my reactions and by swearing and getting into a huff. I think I’ll be more aware of that going forward and I hope that if I do need to swear I can be a little more selective and possibly even creative about it.

What’s your policy on swearing? Any chance you have some good pseudo swear words you can recommend for my moments of inspired rage?