“I'm going to keep my eyes open because I think it'll be scarier that way.”

So, tonight I'm watching a scary movie. Because I NEVER watch scary movies. Because they scare me and then I can't sleep… for months. The last scary movie I watched was It, which messed me up pretty bad and had me going out of way to avoid storm drains – and bathroom drains – for many years to come. Ok, I still can't step on those damn things. But apparently a lot of people enjoy being scared; which seems odd to me but what the hell, let's do this! 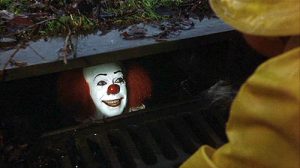 A friend recommends The Stangers, which is a horror/ thriller. Figuring I might not sleep well for a few days I decide it would be best to watch it on a Friday night. As we settle in with our pizza and beer I inform Emrys, in all seriousness, that “I'm going to keep my eyes open because I think it'll be scarier that way.” He laughs but I know it won't be easy to resist the urge to cover my face – which I do whenever I'm scared, embarrassed for someone, or just over excited – but I know it will be worth it to keep my eyes open. And so I hit play. The movie starts with a couple returning from a wedding reception to an isolated vacation house late at night, when they receive a knock at the door, which starts a disturbing chain of events. Oddly enough, while the movie startles me a few times, it never really scares me. Which is weirdly disappointing now that I'm all psyched up and ready to be traumatized.

Once the movie ends we search NetFlix for another scary movie option – something to really keep me up all night – and come up empty handed. What the hell? And that's when I stumble upon Eddie Muphy's comedy routine Delerious.

Have you seen Delerious? It's super funny. So, to set the scene, the year is 1983 and Eddie Murphey comes out on stage in a form fitting, red leather jumpsuit and cracks some jokes about the gays. Eventually he gets around to why he got into comedy (for the pussy); although really, he explains, singers get the most pussy.

Which reminds me of the gaggle of 16 year old Spanish girls I saw walking up West Georgia Street the other day, singing some spanish song in unison. (The tie in being the singing, obviously). Anyway, this isn't the first time I've seen Spanish girls spontaneously break into synchronized song in public. Which made me wonder: why don't I sing songs with my friends as we walk down the street? I mean, it seems kind of amazing and I'd really like to get this party started. I'm thinking I should probably ease my friends into it, maybe work some lyrics into our conversation and see if that starts something? But what is the perfect transition? What magic words should I say to provoke my friends to break out in song?

So where am I going with this and what about that scary movie? Well, I guess the scary movie didn't scare me but rest assured, I do have a number of experiences coming up which are sure to terrify. As for Eddie Murphy and the singing Spanish girls, I really don't have an adequate explanation for that, except to say that you need to watch Delerious tonight and give some serious thought to what song you want to sing with me next time we're walking around. Because while I don't understand wanting to be scared I do love to laugh and I'm pretty sure listening to you sing would get me there.