“A Canadian is merely an unarmed American with health care.”
John Wing

This week I’m off to celebrate Canada Day at Canada Place. It promises to be a crowded event, full of excited, screaming kids and people wearing cheesy shirts and hats. Basically, an absolutely deplorable experience with very little redeeming value. Which is probably why I never participate in these events. Well, that and the fact that my husband never gets holidays off but rather works an extra long day (restaurant work has inverse holidays to the rest of the world), leaving me feeling less than enthused and happy to hide out (indulging my crowd averse, introvert tendencies) rather than joining in the festivities. But not this year. This year I’ve bought myself a Canada Day, Hello Kitty tank top and I’m ready to go!

I’ll be meeting up with my friends around noon but first, in a nod to my quiet, nature loving ways (a Canadian attribute, no?) I wake up early and start the day with a bike ride to Ambleside Park. It’s barely 7am when I get on my bike and the sun dappled roads are empty, allowing me to speed down the hill without a worry, breathing in the delicious, cool morning air.

An hour later, I’m back from my ride. I have a shower, eat some breakfast and I’m off down the hill to the SeaBus and across the water to Canada Place. First I’ll head to the Celebration Stage to hear a little VOC Sweet Soul Gospel Choir and then I’ll take in a Citizenship Ceremony.

On the way I come across a gaggle of Japanese girls selling maple leaf body stamps. Needing to get in mode I decide a stamp is in order. One of the girls sees me approach and says “I will take the money” to which I reply “I bet you’d like that” but then hand over my looney. We discuss where I should get stamped and settle on the forehead. Perfect! She lines up the stamp, takes a moment to centre it and stamps me right between the eyes. Another girl steps in with some paint to touch up the design. They give me a bonus stamp on my arm for good measure. When I catch my reflection in a nearby window I can see that my stamp is clearly off centre. Oh well, I guess that extra stamp was a pity bonus? Nonetheless, I’m feeling increasingly patriotic as I make my way to the Celebration stage.

When I arrive the gospel choir is in full swing. They’re pretty good, although I can’t help but think this would be better outside in the sunshine, rather than in the convention centre hall. It’s pretty cheesy music but I’m still grinning and swaying to their infectious rhythms. Along the sides of the auditorium are volunteers, predominately young Japanese Canadian women, who wave their tiny Canadian flags with an unnatural enthusiasm. The music ends and my friend Krista arrives just in time for the citizenship ceremony, which starts with local media personalities announcing the distinguished guests, who parade in to the sound of bag pipes; which clearly is the best way to arrive anywhere.

The citizenship ceremony is mercifully short. The officiating judge tells us how being a Canadian is like the two sides of a coin; a looney to be exact. On the one side you have rights and freedoms and on the other side you have duties and responsibilities, such as voting and charity. I question wether I’ve been a good Canadian and resolve to do more. Krista giggles at the repeated reference to “doodys” and I can’t help but giggle too. When did I become a 12 year old? Or did I ever stop?

The officiant invites us to renew our vow to the Queen along with the new citizens, which I do. As I raise my right hand and swear to “bear true allegiance to Queen Elizabeth, her heirs and successors” I worry that I’m now bound to obey the whims of the British? Having been born into Canada I’ve never given this whole allegiance thing much thought. Next we are asked to repeat the vow in French; my pronunciation is atrocious and I have some concerns about what I actually said. Vows made, the new citizens walk up on stage, shake the dignitaries hands and receive their paperwork.

Soon enough its time to head over to the Jack Poole Plaza to meet up with Brianne and check out the West Coast Lumberjack Show! After a few texts (where are you in this god awful crowd?) we manage to locate Brianne and find a spot to watch the Lumberjack Show. The show is pretty corny. I mean, I get that they need to appeal to the kids but it’s terribly written. Nonetheless, it is a spectacle replete with sawing, chopping, axe throwing, log rolling and climbing. The lumberjacks play up all the stereotypes, creating larger than life caricatures of themselves. As I watch the wide eyed crowd drinking it all in, I think I’m starting to understand why city people have such a warped view of rural Canadians. 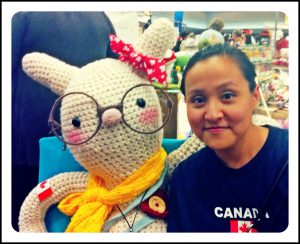 After the Lumberjacks we stop in to nearby Tap & Barrel for some Canadian beer – which is NOT Molson Canadian by the way – but rather some of Driftwood’s Fat Tug IPA and Tree’s Mellow Moon Pineapple Hefeweizen. Refreshed and emboldened we brave the crowds again, making our way to Salty’s Market, which is pretty much a big craft fair. After circling the room once and checking out all the bits and bobs, my crowd averse friends and I are tapped out and ready to retreat. I bid them farewell and hop on the SeaBus; heading back across the water to the cool, quiet of my home.

Thinking about it the next day, I’m glad I got out and celebrated Canada Day and I’d do it again; although perhaps a bit differently. Maybe less crowds and more BBQ and beer? Is it too early to plan for next year?